How to Adjust to the Fall Time Change 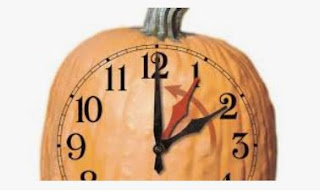 It’s that time of year again – time to fall back and set our clocks back one hour.      Resetting clocks in devices is simple.    Unfortunately, your body clock is not nearly as easy to reprogram.    This comes with some serious health consequences.  An hour time shift does not seem like a lot, but your body runs on a tight schedule and this one-hour change throws us off.
Scientists have documented that the shift to daylight saving time in the spring, when we lose an hour of sleep, is linked to an a much higher rate of attacks and car accidents.  Although we gain an hour to sleep – the change throws off the sleep cycle and that is where all the problems come from.

Over the last 20 years, scientists have documented that, in addition to the master clock in our brains, every cell in our body has a circadian rhythm and time-keeping mechanism. The body and cell’s circadian rhythm help regulate important functions such as sleep and metabolism. And increasingly, there's evidence that when our habits — such as when we eat and sleep — are out of sync with our internal clocks, it can harm us.

When we disrupt our routines with erratic sleep or eating habits, it can increase the risk of metabolic disease. For instance, overnight shift workers are at much higher risk of developing diabetes and obesity. Research also shows that kids who don't have set bedtimes and mealtimes are also more likely to become overweight.

As days get shorter with less daylight, it's easy to fall into bad habits, and light exposure is key to regulating circadian rhythm.     It is the primary signal to turn on the body’s metabolic processes for sleep and rest to active and alert.
How to prepare for the dark days
Go to bed an hour or so earlier and get up 8 hours later. Maximize your exposure to daylight in the morning hours, since it gets dark so early in the evening.

Exposure to light and electromagnetic fields from computers, phones, tablets, and T.V.’s all act as a stimulant, so it is important to minimize nighttime light exposure and blue light exposure in particular.  Blue light comes from artificial lighting.   Blue wavelengths – which are beneficial during daylight hours because they boost attention, reaction times, and mood – are disruptive at night.   Energy efficient lighting is packed with blue light as our electronics.

So try to turn off lights and if you must use a computer get a blue light filtering program that will adjust the amount of blue light emitted by your computer, phone, and tablets such as flux – https://justgetflux.com and the Twilight app for your phone.   Both allow you to set times and adjust blue light output of your devices automatically based on time of day!  You can also buy blue blocking glasses to use in the evening.   This may seem gimmicky but there is very well done research supporting the effectiveness of reducing blue light in the evening through these and other measures!

Is Diet Soda Really Worse For You than Regular Soda?

A recently published study looked at this question and was all over the media.     What did the study conclude?  It concluded that drinking 2 or more sodas per day (of any type of soda) was associated with a 17% increase in mortality.    Further the study concluded that regular (non-diet) soda drinkers were 8% more likely to die at follow-up than those that consumed less than one glass per day.

Those people that drank two or more artificially sweetened sodas were 26% more likely to die at follow up than those who drank less than one diet soda per day.   Seems pretty simple right – clearly diet soda is WAY worse than regular soda and all soda is bad, but is that really the story?

When we look at the study itself in more detail the picture is not so clear!    First of all, the study involved giving people ONE questionnaire on their average daily soda intake at the beginning of a 16-year study.       This is a big problem because self-reported intake is notoriously inaccurate and assuming that people kept their soda intake fixed for 16 years is a whopper of an assumption as well.

Another problem is that the study cannot account for what are known as “confounding variables” meaning things like smoking and alcohol use or other unhealthy behaviors.   The study attempted to “guess” at the levels of these unhealthy behaviors by using statistics, but the fact is that no one knows who did what in the observational study.

This is a big problem because it may in fact be the case that most people drinking soda were engaged in unhealthy behaviors like smoking, high alcohol consumption, and/or lack of activity.     So, it could be that people who drink sodas tend to have more unhealthy behaviors and the increased death rates may have nothing to do with soda!

Last but not least lets take a look at “absolute risk” rather than relative risk which is ALWAYS important.     Here is how that works.    In the study out of 225,543 people who reported less than a glass per month of artificially sweetened beverages at baseline, there were 21,032 deaths at follow-up.  In other words, 9.3% died.    For the 6,292 people that reportedly drank two or more glasses of Artificially Sweetened Beverages per day at baseline, there were 737 deaths at follow-up.    So in this group 11.7% died.

So long story short soda should probably be treated like other lifestyle issues – in moderation!     By the way calories DO count and sugar has real calories, but diet soda does not.    Is this a license to drink lots of diet soda – NO!

Quercetin for Allergies and Viral Infections

For much of the country allergy sufferers are at their peak of suffering, but the good news is that there is a well-proven nutritional supplement that can help mitigate allergy symptoms without the side effects of over the counter (OTC) antihistamines.    Unfortunately these OTC drugs are not without issues including being linked to the progression of dementia (https://www.health.harvard.edu/blog/common-anticholinergic-drugs-like-benadryl-linked-increased-dementia-risk-201501287667)

Quercetin is an flavanol found in apples, plums, red grapes, green tea, elder flower, and onions to name a few.   In addition to acting as an effective antihistamine quercetin is proven to be highly effective for the treatment and prevention of viral infections such as the common cold and the flu.

In fact, a 2007 study from Appalachian State University researchers did a study funded by the Department of Defense.   The study used had 40 cyclists divided into two groups with one group receiving 1,000 mg per day along with vitamin C and niacin while the other group got a placebo.
They had the athletes ride a bicycle for three hours per day, three days in a row.    45 percent of the placebo group contracted a viral illness after the physical stress compared to just 5 percent of the quercetin supplement group.

In a 1985 Study, researchers found that quercetin reduces the infectivity and replication of Herpes Simplex Type 1, Polio-Virus Type 1, and parainfluenza type 3 along with respiratory syncytial virus.

A 2016 Study found that quercetin inhibited a wide range of influenza strains including H1N1, H3N2, and H5N1.

Inhibiting a virus’s ability to infect other cells (viruses literally infect your cells then take control of them and make them produce more virus!)

In collaboration with the Defense Advanced Research Projects Agency (DARPA) a supplement called “Q-Force” was developed that is proven to:

Q-force is available at www,qforce.com and Quercetin Supplements combined with Vitamin C are available at all health food stores.

The Power of Vertical Training

Vertical training allows low impact, unloading and decompressive exercises and can reduce the frequency of chronic joint symptoms.      There is also strong evidence that range of motion is improved with reduction in pain.

Vertical training is also extremely effective for burning fat, and a study proved that vertical training has the highest caloric expenditure of just about any other workout along with an extremely high post-exercise increase in metabolic rate resulting in an average afterburn of an additional 489 calories burned over the 24 hours following a Vertical High Intensity Interval Training Workout.

What is Vertical Training?

Vertical training was initially developed, tested and validated by a company called Fitwall (www.fitwall.com).   Fitwall equipment includes a ladder/step like device hooked to the wall that exercises are done on.   However other simpler ladder type devices attached to the wall like the exercise ladders used for gymnastics and Barre Classes have been developed.

The fact is you can easily reap the same benefits just performing the exercises on a
ladder attached to a wall.    The key is being vertical – not just up-sloping.

What are Vertical Training Exercises?

Vertical Training Exercises occur with either 3 or 4 anchor points on the vertical access which causes a strong activation of the trunk stabilization muscles).

To get a feel for this programming check out this video of a Vertical HIIT Class:  https://www.facebook.com/balancedathletefitnessstudios/videos/1775624019356609/

and this video showing a great series of simple, yet highly effective vertical training exercises:  https://www.youtube.com/watch?v=Dd9jj9NImRQ