How to Avoid the Nine Biggest Beginner Gym Mistakes 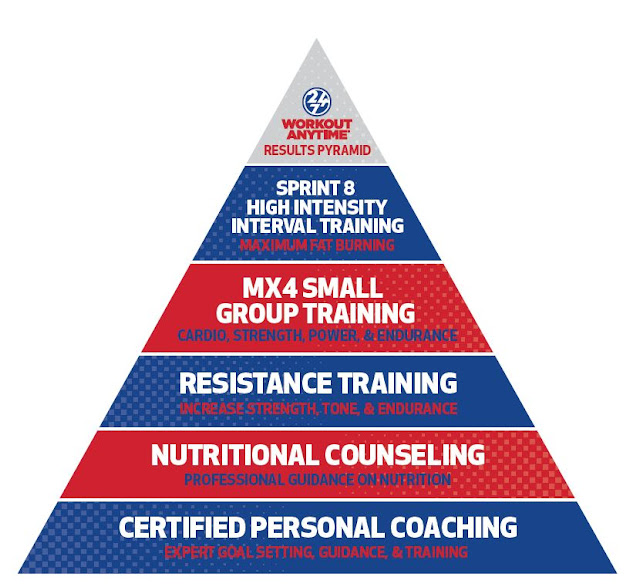 Watch this short video to learn how to avoid the 9 most common beginner mistakes at the gym.     This will give you a simple guide to achieving the results you want in the shortest time possible at a gym: https://youtu.be/-NL1_upNzQU
Posted by Greg Maurer - VP of Fitness - Workout Anytime at 11:14:00 AM No comments: 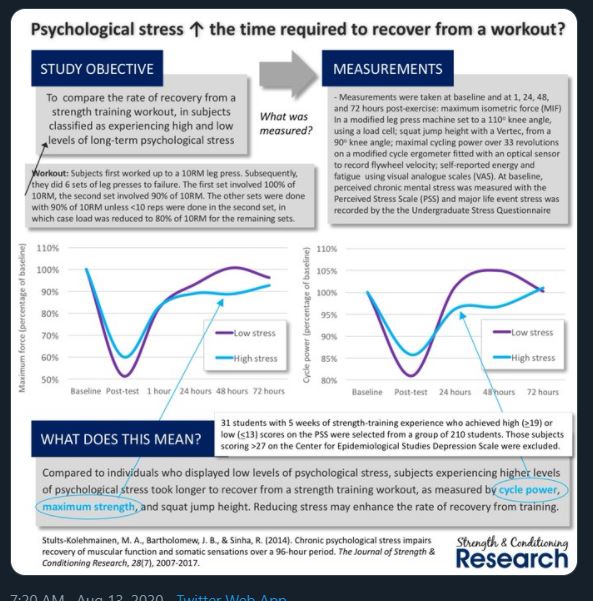 We all know that stress impacts our lives, but what may surprise you is that stress directly impacts how you recover from workouts.     Chronic psychological stress literally increases muscle soreness after a workout and slows down recovery.     This study above proves it:    https://pubmed.ncbi.nlm.nih.gov/24343323

At the same time workouts can help reduce psychological stress so not working out is NOT the answer.      Balance intense workouts with low intensity activity and activities which bring your focus into the moment such as meditation, yoga, playing games, etc. to get the benefits of exercise while enhancing recovery!

How Much Time Should You Rest Between Resistance Training Sets?

One of the most common questions about weight training aka resistance training is how long should you rest between each exercise set?     If you take a look at the relevant research concerning this topic there are some good answers.

For a long time, researchers believed that shorter rest periods were better for increasing muscle size which was thought to occur because of increased levels of metabolic stress by not allowing complete recovery.    However, research done in 2015 shows that using longer rest periods actually results in better results for both increased muscle size and increased muscle strength.     It is thought that this occurs because longer rest periods allow a higher training volume (more repetitions of each exercise).
Another aspect to consider is whether most of your workout uses compound exercises (compound exercises use multi-joint exercises using more muscle mass such as a chest press vs a pec dec or pull-up vs an Lat Pullover).      In a 2012 study researchers found that with shorter rest periods workout volume decreased for both single-joint and multi-joint compound exercises.       However, the decrease in volume in workouts with short rest periods tended to be significantly greater with multi-joint compound exercises vs single-joint exercise (29% reduction in volume with multi-joint as compared to 15% with single- joint exercise). So for strength routines focused on compound, multi-joint movements increased rest time is probably a good idea.
Another study which looked at the effects of rest interval length on training volume discovered another important item:    reduction in training volume occurs mainly between 1 and 2-minute rest periods.    The percentage difference between 2 and 3-minute rest periods is much smaller, except when doing 5 or more sets of an exercise.     So, for people doing 3 – 4 sets per exercise, 2 minutes is a good rest interval, but if doing 5 or more sets you should probably extend the rest interval to 3 minutes.
Another important piece of information is that recreational lifters who self-determine rest periods tend to rest just under 2 minutes between sets meaning that for most lifters doing 3 to 4 sets of several exercises whose goal is increased muscle size and strength you probably do not need to time your rest intervals and can go just go by feel.

Timing rest intervals becomes more important for advanced resistance training such as Power Lifting and Bodybuilding, but for most of us we can just go by how we feel!

How Sugar can Sabotage Your Weight Loss Program

Many people notice that eating breakfast makes them hungrier throughout the day, and this is probably NOT their imagination!   In this case the culprit is likely what they eat.  Specifically, refined carbohydrates, including sugar, can drive hunger particularly if they are consumed with little fat or protein.

A recent study tested this hypothesis with 16 healthy young women between the ages of 18 and 30 who had a stable body weight for the last 3 months.  Anyone with diabetes or on medications that affect appetite was excluded along with people who were allergic to any part of the meals given as part of the study.
Participants fasted for a minimum of 8 hours prior to the study.  In the morning participants came to the laboratory and were given a standardized test meal consisting of passion fruit juice, one cup of coffee, French bread and 5 grams of margarine.   The two drinks had no sugar added and the participants were instructed to sweeten to their preferred taste.
The sugar container given to the participants was weighed both before and after its use by each person to know the amount of sugar each person added to their drinks.   After completing the entire meal participants did not eat or drink anything (except water) until lunchtime.
Lunch was served 3 hours after breakfast and consisted of pasta with tomato sauce, and participants were instructed to eat until they felt satisfied.
Study Results
The participants were divided into two groups based on the amount of sugar they elected to add to their breakfast.   The high sugar group added about 25 grams of sugar to breakfast while the low sugar group only added 14 grams of sugar.
Both groups were evaluated for their perception of hunger and satiety.     The high sugar group had significantly higher levels of hunger during the three hours after breakfast AND consumed significantly more pasta at lunch!
Take Home Message
Avoid high sugar breakfasts such as standard breakfast cereal, fruit juices (eat fruit don’t drink it!) and consume 15 – 20 grams of protein and a small amount of fat.   Also try to add higher fiber carb choices like berries instead of banana, adding spinach to an omelet, etc.      Examples include an omelet with spinach with berries or a shake with protein, greens, and small amount of MCT oil for fat.
Posted by Greg Maurer - VP of Fitness - Workout Anytime at 9:59:00 AM No comments:

How Many Repetitions and Sets are Required to Get Results from Weight Training?

Many hours are spent in heated debate on this topic, but the truth is that the number of reps per set and number of sets per workout are secondary measures.       A close review of the scientific research shows that the weight of evidence does NOT support the idea that different numbers of repetitions have differential effects on muscular strength and endurance.       Furthermore, a review on this subject concluded that “all these studies strongly suggest that within a reasonable range of repetitions, approximately 3 to 20, there does not appear to be a specific number of repetitions that will elicit more favorable gains in muscular strength, power or hypertrophy.”

What does matter then?   It is ALL about reaching momentary muscular failure (meaning that you cannot complete another repetition of an exercise in good form.     If you do not reach muscular failure or come very close the reps and sets will not produce results.     Perfect form is part of this equation because perfect form means keeping tension in the targeted muscle/s throughout the entire repetition and not using momentum.     For example, allowing the weights being lifted to settle on the top of the weight stack means you are unloading the muscle – NOT what we want to do!     Throwing weight using momentum is another way you can deload the muscle.   The key is performing smooth, steady repetitions throughout the range of motion for an exercise with no deloading until you reach momentary muscular failure.

For beginners one set to failure between 8 – 15 repetitions is plenty for each muscle group.   Over the longer haul repetitive sets may become necessary to make progress – but never sacrifice reaching muscular failure and perfect form to do extra sets!