Omega 3 fatty acids are essential polyunsaturated fatty acids (PUFAs) required for digestion, muscle activity, blood clotting, visual acuity, memory, proper cell division and function, cardiovascular health, cancer prevention, etc.    They are essential meaning your body cannot manufacture them so they must be consumed as part of your diet or as a supplement.
Another class of essential fatty acids are Omega 6 fatty acids which also perform a wide range of essential functions.    However, it is very easy to get enough Omega 6 fatty acids and in fact the ratio of Omega 6 to Omega 3 fatty acids has become completely unbalanced as part of the modern lifestyle, and this is having direct and severe health consequences!
Omega 3 Fatty acids come from either plant or animal sources including:
Many fish
Krill
Canola Oil
Flaxseed
Walnuts
Animal based sources of Omega 3 contain (fatty fish, fish oil and krill oil) primarily contain docosahexaenoic acid (DHA), a long-chained PUFA consisting of 22 carbons and eicosapentaenoic acid (EPA), which has 20 carbons.
Plant based Omega 3 fatty acids shorter-chained PUFA consisting of 18 carbons. They are completely devoid of DHA and EPA.
Functions of Essential Fatty Acids
Essential Fatty Acids (EFA’s) are integrated into cell membranes and produce a broad class of extremely powerful chemicals called “Eicosanoids” and among these specifically Prostaglandins.     These chemicals produce a myriad of effects but long story short Omega 6 fatty acids produce inflammatory chemicals while Omega 3 Fatty Acids produce anti-inflammatory chemicals.  Both are necessary for good health, but because of modern diets and an Omega 6 to Omega 3 ratio that is way out of balance virtually everyone needs to find ways to decrease the intake of Omega 6 fatty acids and increase Omega 3 fatty acids.
As the chart below shows not all Omega 3 fatty acids are the same. 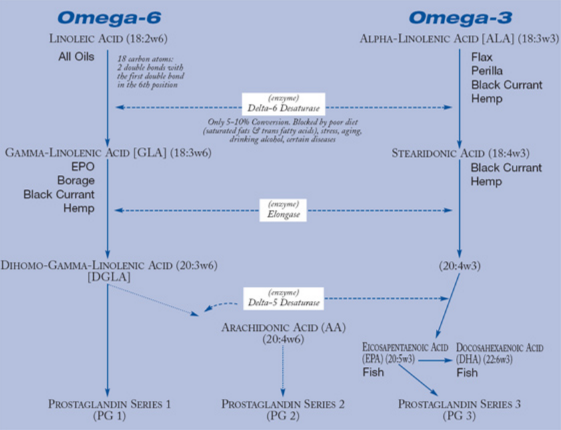 ALA requires three steps to be converted to EPA or DHA which are the direct precursors to the Anti-Inflammatory Biochemicals that produce key benefits throughout the body.     These steps are controlled by three enzymes and when a person is deficient in any of these three enzymes this conversion does NOT take place.    Unfortunately, the majority of people have deficiency of Delta-5 Desaturase.   So plant sources of Omega 3 fatty acids are not effective.
Typically, less than 1 percent of the ALA is converted to EPA. Some studies have found the conversion rate to be as 0.1 to 0.5 percent. Conversion is also dependent on having adequate levels of other vitamins and minerals.   So, while a tiny amount of the ALA you consume can be converted by your body into long-chain omega-3, it's a highly inefficient strategy and nowhere near as helpful as supplying "straight" DHA and EPA from marine sources.
It is important to know that you should NEVER take flax oil or use ground flax seed unless it is freshly ground because the highly perishable ALA will be oxidized. If you have any throw it away immediately.

Effects of Plant Based Omega 3 vs Marine Based Omega 3
After eating a meal of salmon or taking krill or fish oil (marine sources of Omega 3 fatty acids), the fatty acid level in your plasma (blood) will remain elevated for more than three days afterward.   These fats are not typically used as food for energy
ALA from plants is rapidly absorbed, peaking a couple of hours after ingestion. Within 10 hours, they're gone. These fats tend to be used as fuel!
So, Omega 3 fatty acids from plants are simply a source of energy — while the long-chain fatty acids, those with 20 and more carbons, especially EPA and DHA, are structural elements that actually make up your cells. This is a MAJOR difference between plant- and animal-based sources.
EPA and DHA have many biological effects, most notably anti-inflammatory activity and communication within the cell and between cells.
Another tell-tale sign suggesting the importance of EPA and DHA is their half-life, which may be as long as 60 days for DHA. Your body tends to accumulate and hold on to it and not want to let it go.
EPA is used up much faster, in part because it's a smaller molecule, but also because it behaves differently from DHA.
EPA and DHA are Essential for Good Health
DHA is especially important, as it is a component of every cell in your body, and it's particularly crucial for your brain. More than 90 percent of the omega-3 fat found in brain tissue is DHA, and the development of a normal brain in a fetus is dependent on the availability of DHA. All other omega-3 fats are found only in trace amounts in your brain, including ALA, regardless of how much ALA you consume.

There are specific transporters for long-chained omega-3s in your blood-brain barrier, the placenta of pregnant women, which transport these molecules in a very precise way into the cell membranes where they belong. No such transporters exist for ALA from Flax or other sources.

Therefore, the key is obtaining your Omega 3 fatty acids from animal sources NOT plant sources!

There are two primary animal sources of Omega 3 Fatty Acids: fish oil and krill oil.  Krill are plankton that feed on algae and concentrate Omega 3 from this source.
Both fish and krill oil contain EPA and DHA. However, there are important differences between these two marine sources. One of the most important differences is the fact that krill oil is bound to phospholipids.
Fatty acids are water soluble, but they cannot be transported in their free form in your blood — they require a lipoprotein carrier. Most fatty acids are bound to esters, which do not travel efficiently in your bloodstream. Krill oil is an exception in this regard.
• Fish oil is bound to triglycerides and methyl esters: which must be broken down into DHA and EPA. About 80 to 85 percent is simply eliminated in your intestine.
• Krill oil is bound to phospholipids: which allows the omega-3 fats to travel efficiently into your body resulting in a much higher level of bioavailability meaning you absorb more of it. Studies have shown that Krill Oil is up to 48 times more potent than fish oil.   This means you need far less of it than fish oil.

• Krill oil also has natural astaxanthin: Since omega-3 fats in marine oils are polyunsaturated they are highly vulnerable to oxidation and going rancid. Astaxanthin is a potent antioxidant that protects high perishable Omega 3 Fatty Acids and is not found in fish oil.  Tests reveal that krill oil remains undamaged after long exposures to oxygen for many hours. Fish oil goes rancid after a single hour. Krill oil is almost 200 times more resistant to oxidative damage than fish oil.

• Krill contains phosphatidylcholine: when you consume fish oil, your liver has to attach it to phosphatidylcholine in order for it to be utilized by your body. Krill oil already contains phosphatidylcholine, which is one more reason for its superior bioavailability. Phosphatidylcholine is composed partly of choline, the precursor for the vital neurotransmitter acetylcholine.
Choline is important to brain development, learning and memory. In fact, choline plays a vital role in fetal and infant brain development and is particularly important if you are pregnant or nursing.
• Superior metabolic influence: Krill oil is superior to fish oil when it comes to having a beneficial influence on your genetic expression and metabolism. Genes have "switches" that can be flipped on and off, which control virtually every biochemical process in your body, and nutrients like omega-3 fats control these switches.
Essential Fatty Acids help to direct metabolic processes such as glucose production, lipid synthesis, cellular energy, oxidation and more.    Krill oil:

• Contaminant-free: Unfortunately, most fish are full of mercury and other heavy metal contamination, courtesy of widespread pollution. Antarctic krill is not contaminated. Krill is harvested from cleaner Antarctic waters. In addition, because krill are extremely small and feed on phytoplankton they have virtually zero levels of harmful mercury and heavy metals.
Balancing Omega 3 to Omega 6 Fatty Acids

>>>>> Click Here <<<<<
As you increase your intake of animal-based omega-3 fats, the EPA and DHA content in your red blood cells increase. As your omega-3 ratio increases in the cell, it displaces omega-6 at a ratio of about 1 to 1. While you need some omega-6 fats, we tend to get FAR too much of it these days. One big culprit is soybean oil. Soybean oil is highly prevalent in western diets – it is cheap and full of toxins!   Our intake of soybean oil rose 1,000-fold between 1900 and 2000.
Dosage Recommendations for Omega 3 Fatty Acids
One of the best ways to get your Omega 3 Fatty Acids is eating cold water fish such as Alaskan Salmon aka “wild caught salmon”.    If it does not say this, then it is farm-raised and has low levels of Omega 3’s and is chock full of contaminants!
For supplementation Antarctic Krill Oil is the preferred form but look for brands that do NOT use hexane for extraction!  500mg per day is a good starting dose and adjust based on your response.   Contraindications include being on any kind of blood thinning drug!
Omega 3 Levels and Carbohydrate Intake
Another factor that dramatically influences Omega 3 Fatty Acid levels in cell membranes is the amount of sugar and starch you eat regularly.   Remember at the end of the day it is all about the content of Omega 3 fatty acids that get incorporated into your cell membranes!   Part of this is determined by the type and amounts of Omega 3 you take in along with how much Omega 6 Fatty Acids you take in, but that is not the whole story by a long shot!
One of the biggest factors controlling fatty acid metabolism and levels of fatty acids in cell membranes is the amount of sugar/starch in the diet.   Low carbohydrate diets with less than 20% of daily calories from sugar and starch can result in increased Essential Fatty Acids in cell membranes.    Specifically, with a sufficient reduction in sugar and starch intake levels of Omega 3 fatty acids go up in tissues!    This occurs through a complex series of metabolic switches that result in a slowdown in the destruction of Essential Fatty Acids!
Bringing it all together!
So, to optimize the health benefits of Omega 3 Fatty Acids increase your intake of Wild/Alaskan Salmon and/or take a high-quality Krill Oil Supplement.    And to really reap the benefits consider dramatically limit your intake of sugars and starches.