How to Overcome a Negative Habit 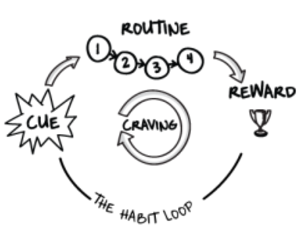 Habits are powerful.  Unfortunately, they often are created outside our consciousness and without our permission. However, we can consciously change habits. Habits shape our lives far more than we realize— they are so strong, in fact, that they can cause our brains to cling to them at the exclusion of all else, including common sense.

At the same time, positive habits can change our lives for the better. So how are habits created and what can we do to influence them in ourselves and our clients?

Three Parts of a Habit

The Cue: a situational trigger that is based on a reward you are seeking.

The Routine:  a physical or emotional action you take to obtain the reward.

The Reward:  the satisfaction you get by following the habit.

The Steps to Changing a Habit

Identify the Routine:  You must identify how you go from a particular cue to the routine of the habit and the reward it gives you.

The first part of a habit is the cue, but before the cue there is some type of craving.  Cravings drive habits.   Understanding cravings is key to figuring out habits.  In a habit, there is a specific reward that satisfies a particular craving.    In other words, figure out what you are getting from the habit because you ARE getting something from it!

Rewards are powerful because they satisfy cravings. But we’re often not conscious of the cravings that drive our behaviors. For example, when developing the air freshening product Febreze marketers discovered that people craved a fresh scent at the end of a cleaning ritual.  They found a craving that people were not aware of.     This craving is so strong that without added scent most people do not get satisfaction from an air freshener that just removes odors from the air - they have to smell the scent!   It is exactly the same phenomenon with breath freshners which can be made to eliminate odor WITHOUT any taste/scent, but no one buys them!

Most cravings are like this: obvious in hindsight, but difficult to discern when they are in control of your behavior. It is critical to discover the cravings that drive habits to be able to change or create habits!   To figure out which cravings are driving particular habits, it’s useful to experiment with different rewards. For example, say your reward is having a cookie after studying every night.  The next time you study deliberately substitute something else for the cookie such as going for a short walk or having a cup of tea instead.

The next time eat an apple and another time change call a friend for call, etc. What you choose to do instead of eating a cookie is not important.  The key is to test different hypotheses to determine the exact craving that is driving your routine.   Are you craving the cookie itself, or a break from work? If it’s the cookie, is it because you’re hungry? (In which case the apple should work just as well.) Or is it because you want the burst of energy the cookie provides? (And so coffee may work just as well.) Or is it where you eat the cookie and who you are with?  Do you go to a specific place to get and eat your cookie?  If so maybe the real craving may have to do with a desire to socialize.

As you test four or five different rewards, use this technique to identify patterns.  After each activity, note the first three things that come to mind after your reward behavior. This can be emotions, random thoughts, reflections on how you’re feeling, or just the first three words that pop into your head. Then, set an alarm on your watch or computer for fifteen minutes. When it goes off, ask yourself: Do you still feel the urge for that cookie? The reason why it’s important to write down three things— even if they are meaningless words— is twofold. First, it forces a momentary awareness of what you are thinking or feeling.

By experimenting with different rewards, you can isolate what you are actually craving, which is essential in changing a habit.

Determine the Specific Cue for the Habit

This is the trigger that initiates the craving for the reward.   So it is very important to learn the cues for habits.   Common cues including being in a particular place, being with a particular person, a particular time of time of day, a specific emotional state, etc.    Asking yourself these five questions can be very helpful for identifying cues:

Where are you when the urge for a reward hits you?
What time is it?
What is your emotional state?
Who else is present?
What did you do right before you had the urge?

Once you understand the habit you want to change you need to create a plan to change the habit!   The easiest way to do that is have a specific plan of action whenever you experience the cue or cues.    For example, if you smoke when you have coffee know this and plan to do something else deliberately whenever you have a cup of coffee.   The plan is key or you will slip right back into the old routine.

Another example is having a few beers every night when you get home.  Through the first three steps you discover that having the beer helps you relax after a stressful day.    You also learned that going for a 20-minute walk or doing Tai Chi gives you that same reward of feeling relaxed.   So now you plan to either go for a walk or do Tai Chi ever day as soon as you get home (or even better before you get home!).